So today i am riding along the big river trail at a leisurely pace and come upon two women, down in the drops, looking like they had a mission. I politely but with intent say "On your left," assuming they would just continue their chatting and move over even slightly to let me go by.
I wasnt hammering ( ahem it is October and it is 40 degrees) but moving along a bit faster than they were. So one gal pulls over and the other one, lets call her yellow bike lady, gets OUT of her saddle and starts sprinting. OK.

I turn to blue bike lady and casually say "Oh sorry i wasnt sure if you guys were just chatting and i didnt want to be sitting on your wheels without you knowing i was there." Basically saying i didnt want them to suddenly slam on the brakes or decide to ride 12 mph when i was going 20 mph.

Blue bike lady "Oh dont worry, we are chatting. And she ( yellow bike lady) has her OLD HEAVY BIKE so we arent going fast." I am thinking that yellow bike lady was going fast, fast enough to NOT LET ME PASS!
So i say "ok, thats fine i am not in a hurry," meaning "Ok i am not going to race anyone ..today."

BBL: " NIIIICE OUTFIT! Do you race? Do you ride on a team.." the questions started flying.
Me: " Yea I do."
BBL: " And you are so slim. You must run. Alot. Do you run?..How far you riding today? We are on our long ride today. We live in...Apple Valley"
Me: "Yea alittle running... more biking."
At this point i am trying to figure out which route i will take so as we approach the port-a-potty I say "so you gals going up the hill or continuing on water street?"
BBL: ( As Yellow bike lady is about 10 feet ahead of us, winning this part of the circuit ride)
"We need to use the porta potty."
Me: "Ok great, enjoy the day and have a good ride!"

So for the next part of my ride home I was thinking...and I have thought of this many times...
Why do people, usually always women find that it is Ok to say to someone, a complete or total stranger:

Think in another context...

" SO YOU ARE CARRYING SOME EXTRA WEIGHT IN YOUR LEGS ( MIDSECTION/name your anatomy)...YOU MUST NOT RUN?"

I am by no means saying it is a burden to be slim. Genes, good healthy lifestyle, good diet, blah blah blah...but over my years as an athlete and as a normal person doing normal daily things like shopping, working. eating out, etc..I continue to be amazed that people, especially women, find it acceptable to say to me "You are so skinny. You had better get something to eat." or "You are slim you must workout ALOT." And these are, like Blue bike lady, people I dont know. Or may have just met, say at a party.

Would you say to someone you dont know or dont know well:
"You look like you have gained some weight. You had better order the diet plate."
OR
"You are looking heavy. Legs a little thick. Have you thought about taking up running?"

This isnt a rant or a vent. I am lucky to have the genes i do and to really enjoy the lifestyle that allows me to have a healthy body. And yes, like alot of women, at one time I fought and conquered an eating disorder. But until i was mature enough to understand it, comments like the ones today would have made me feel insecure about my body. But today it doesnt. It just makes me feel grateful that i know my body...Even if Blue bike lady is comparing herself to me, and if Yellow bike lady "Won" the workout! 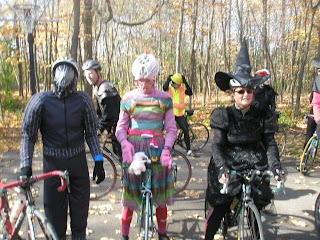 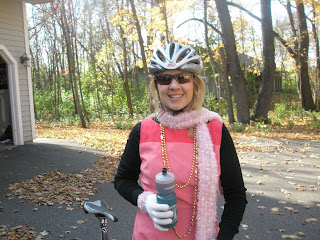 Verve-teammate Sheryl. She and hubby Robert were the hosts of this fantastic day!
The ladies in pink practiced a few Verve breaks, just in case we are ever racing or doing a team TT in our finest. Dresses. 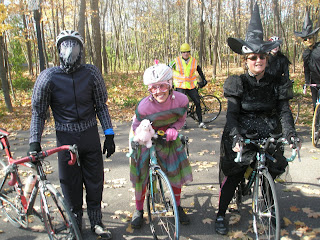 Checking in on the pooch who was riding bare back ( is that x rated?) on my handlbars.
Little Pink Poodle purse.. 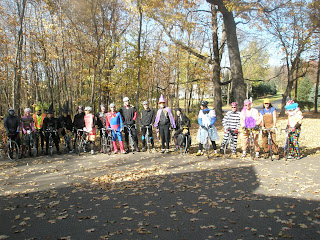 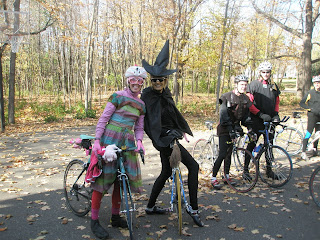 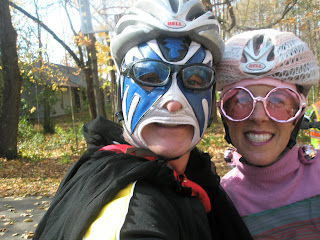 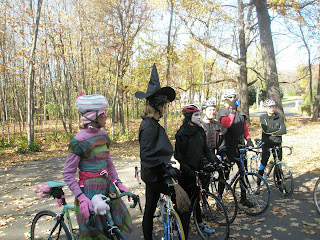 Here is where the riding got SERIOUS. ACtually we were getting instructions as to where we would be staging for Perk at Play to film us. Long story short we will be on the Kare 11 news on tuesday night at 10pm. Dont miss it. If it hadnt been 58 degrees and sunny it wouldnt have been as much fun to be riding around Baker park with Perk taking numerous shots and then begging for a "re-do!"

So actually got in nearly 30 miles in the dress. Does that count for more? And the glasses?
We finished it off with some super chow at Sheryl's and a fire in the fire pit! Sweet day saturday. and now it is snowing. 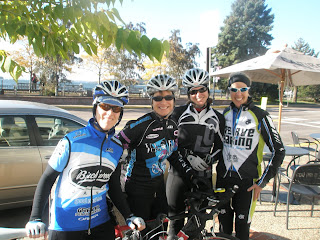 Not much going on so the blog hasnt been updated. The fall in MN is awesome, but it makes riding somewhat of a chore. My goals are often so simple: Stay off the trainer as long as possible.
This translates to figuring out the exact science of layering, where the wind is, and how cold my toes and fingers may get unless i look like the michelin woman well before the snow falls.
Those of you that know me, remind me to wear the shoe covers and the lobster gloves well before you think YOU need to wear them, bc otherwise i will torture you with whines about how cold my toes and fingers are. And eventually SPIN class and the trainer will win out, bc soon I will want to sweat. Real sweat. Not the cold sweat that makes you hate heading back into a wind on your way home.

In the meantime Life is good. Cant complain. And I plan to ride outside transferring to the cross bike with fenders ( that is when the mud gets really fun) as needed..as long as I can. Luckily I am loving running and also swimming. I have even started back doing Master's workouts and will hit the real deal this week.

Today in the locker room after my swim a woman was talking about the upcoming Daylight Savings. I cringed when she said "You know ...when we hit DLS...well..the DOOR SLAMS SHUT."

I guess if that was the most depressing moment of my day I am pretty lucky!
Oh and excuse the font, my blog seems to have a mind of its own, not obeying commands to change font size. 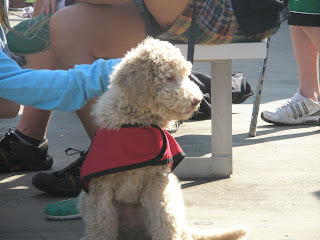 ARMY VS NOTRE DAME : LACROSSE DAY IN MN!
1st ever D 1 LAX game in Mn...and it was over run with high school kids and their teams. Quite impressive to see so much energy for the game. And a few SWARM people there too.

Isnt this the cutest dog ever? Looking left...
This layout is really annoying me, it seems to be doing whatever it pleases so just go with it.
Labradoodle in training for the hearing and vision impaired. I spent the first part of the LAX game taking his picture. 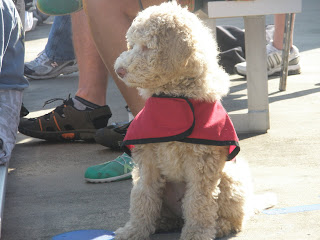 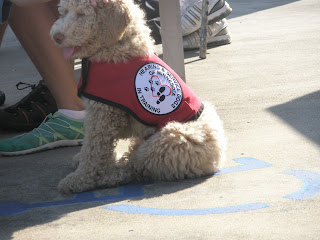 Hanging out watching the game... 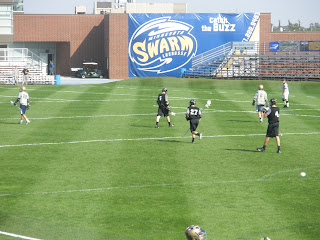 Cousin Alex plays for Army, his dad, An 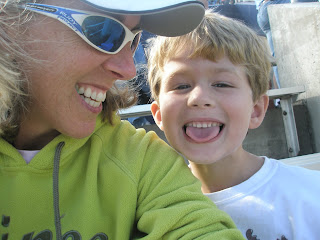 gus was sporting the dad button. My nephew, wasnt going to take a straight picture but i sure got a good look at his tongue. A 6 year old boy, what do you expect! 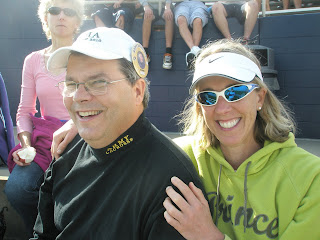 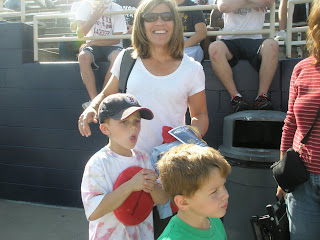 Cousin Sara and her kids... 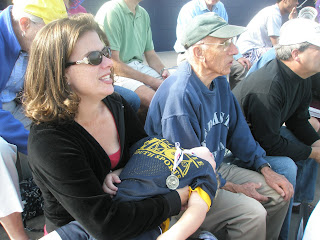 Nephew #2 doing a back flip on my sis in law's lap. He was trying to get D-daddy's attention but Dad was deep into the game. 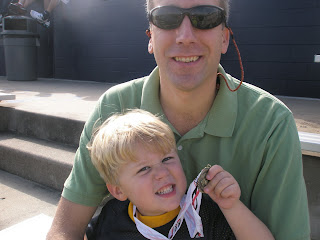 After the back flip he did show off his medal he got in soccer. My brother played soccer in high school and had the honor ( and skill!) to play with the Lagos brothers, Tony Sanneh, Amos Mcgee. and some other players that went on to coach and play at the pro level. Buzz was his coach and I know Rob takes alot of that coaching approach to the kids Rob coaches now.

The day was brilliant and after a second OT West Point emerged victorious over the Fighting Irish. Sadly my camera FROZE when i had the chance to snap a pic of my super duper cousin Alex, but maybe the camera was in aww of the athleticism that he and all his teammates had just displayed to the over 5000 fans at the NSC!

Honey and i got a good 2 hour ride in that morning, majorly overdressed not really TRUSTING that it would indeed be 70, but sure not complaining.

Then to top it off we headed home, rested a bit, and went to the WILD season opener.
I am not sure who to cheer for ( I mean, I will cheer for the WILD!) but minus Rolston, Branko (easier than spelling last name!), Parrish....I would guess it will be Koivu. Solid player and good guy.

Wild 4-Bruins 3. We nearly lost it ...Bruins scored twice in the last few minutes but all in all it was a great opener for the Wild. and it was nice to walk out of Xcel and have it be WARMER outside than in the arena!
Then i rushed home to see where all the peeps i was following at Kona were. AMAZING for them, congrats to anyone who raced, anyone who cheered or anyone that just followed that day, it sure is special and I am excited to hear more from the MN folks that raced!! 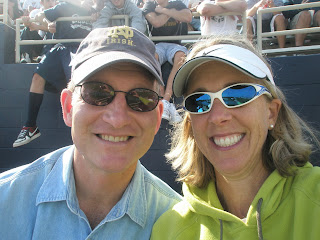 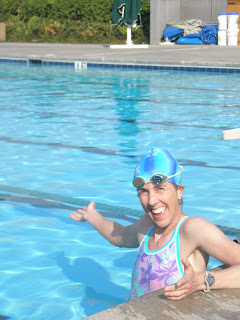 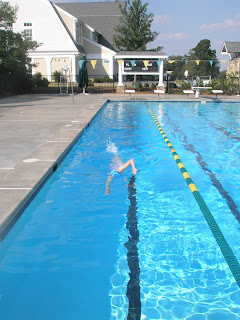 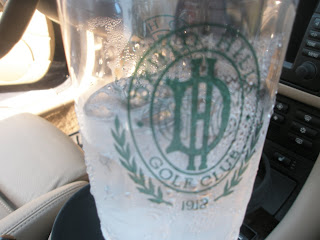 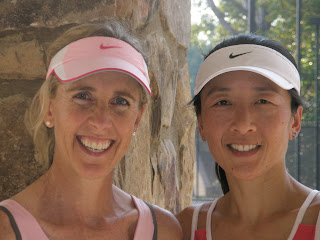 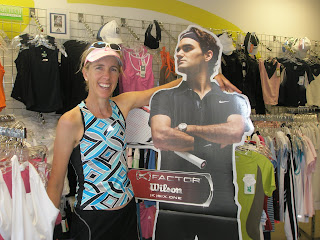 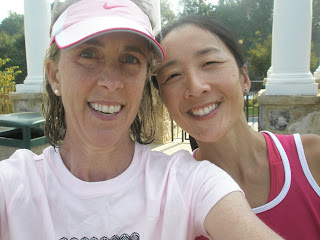 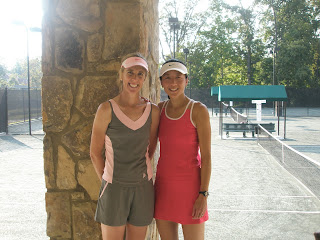 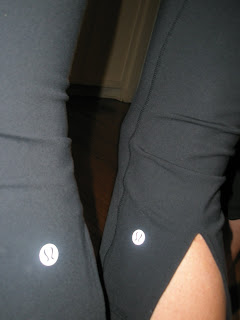 So we played tennis alot,
Dor-tree lived up to her name and TREE-D in her ALTA match ( thanks to my successful coaching earlier in the warm up) and we drove around with
the top down. Too much fun.

Since I am now as obsessed with LL as CY is, and Dortree and I ( aka Doris Becker) bought matching LL capri's we had to take a pic of them. Weird i know.

I got in a few good runs and one outdoor swim, and enough tennis to remind me that i still like to pound small objects at lightening speed and nothing beats new balls on good har-tru courts.
The only disappointing thing about the trip is that no matter how hard i tried, Roger seemed to be ignoring me. Ok and Doris did think I was a bit obsessed with taking pictures of random things, like cups and pant legs!
Posted by GoBigGreen at 1:46 PM 2 comments: 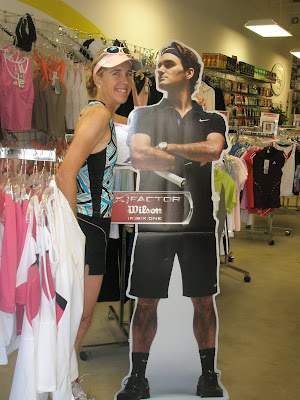 Look who I found in Atlanta?