Lots of Off-Season going on

At the risk of not blogging until there is another life changing event ( haha, i mean race) I decided to check in. Nothing much happening here other than working out for no reason other than to burn off all the apple pies i am making ( thanks Caroline!) and the peach pie which i think was more of a hit than the apple.

So getting my head into fresh air has been the best thing for me. It all the sudden got cold, so the cross bike has gotten some road time even tho i am way slower than ANYONE on that so its often a sufferfest which has me thinking " Why are you doing this? You are supposed to rest!" So i work hard then will drop off for a bit if i get a bit "meh" on the quad lock going on. Running has been my savior. I cant tell you how joyous it feels to run, our leaves are still quite nice and its not THAT cold, yet 28 a few mornings had me wondering if we would have an Indian Summer in November. I am not betting on it.

My house has been really really challenging for me lately. I know I know I know. Plenty of you live in a dwelling alone or perhaps you are the person that does all the home stuff. But for me its not so much that i cant do it its just that its ALOT. Take for example, the entire basement is filled with Rich's things. He came to this house post -divorce and i think he got all the wicker baskets and heck of a lot of glassware ( not waterford) and well my lovely husband loved knick knacks. I am talking 300 Sq Feet of boxes and STUFF, some of which is his kids. I actually have a friend come in once a week to help me GO THRU STUFF. ITs that much stuff. Plus the hard part of getting his clothing donated or consigned.

The thing is i am not in a rush to get rid of his things. Some of the things we shared and i love them and i want them. MANY of the things have no memories to me, and his kids have come thru a few times and taken what they want. They will have a chance to go thru more things when i bring a carload of thigns over there tmmrw:) They arent my memories, I cant discard them. And so as much as i hate dropping them in their laps I feel its the right and best thing for all of us. For now its been alot of throwing and alot of labeling. We took a  few HUGE loads to a church that was having a sale and i know GoodWill is going to have some deposits as well. I cant tell you how much work it is, and honestly I was too emotional before this past month to even deal with it.

Now I feel like i am regaining ( or maybe gaining for the first time?) my house. Rich moved in almost a year before I did. He had come from a big house, and I came from a 850 sq foot condo. My stuff in our basement now? Race wheels, a bike. and about 3 boxes of Dartmouth stuff. Rich was the Christmas Santa, LOVED LOVED LOVED Christmas. I have found more ornaments and decorations and singing elves and decorated doors and....it goes on and on. Ornamental glasses and mugs and pitchers and plates and....I think i should have a big Xmas party and you all can wear your decorated sweaters and we will eat off of decorated plates!

Work is good, but the above has consumed me. IF this werent a public blog i would also write more about my personal life that has also been consuming me. Its just been all too much and I have relied heavily on a few close friends ( SORRY I AM SICK OF MYSELF, you must be sick of me too) to help me make some tough decisions. In the end I know i am where i should be.  I never thought I would be single and 47 yo. No crying in my soup here but it just stings a bit when i waited and worked so hard to find Rich and then POOF, gone. He is physically gone but the way I deserve to be treated and knowing what true love feels like? I have not forgotten.

Thanks for reading, sorry about the little trip down " relationship lane." :)
Posted by GoBigGreen at 5:55 PM 3 comments:

Yesterday i raced my last event of the season. In conjunction with the Twin Cities Marathon they started a 10 mile " shortcut to St Paul." Now conisidering my parents live 2 miles from the finish and its the house i grew up in, it really is like i am running home.

I had a nice little break after the last triathlon of the season in late August and I was mentally ready to take on about 4 weeks of a run focus. JH did not let up on me running that is for sure. I felt like she handed me about as much as i could handle including " shake out runs," which i associate with my fast runner friends like Angela.I always felt special to run a shake out run in my Hoka's, and Jen teased me that i nailed those runs as well as the harder one's! She took it easy on me on the bike, as evidenced by my complete near breakdown riding about 48 miles at Rich's Memory ride in mid september. Yikes. Not in bike shape. Swimming has been fine and we have still be in the lake just because we can.

Ok as for the race I had a few niggles that came out of nowhere but i nailed a tough track wko the tuesday prior so i figured unless I woke up on the wrong side of the bed i was good to go. I think Jenny didnt know if i could meet my goal. But my goal was to go zub 7's for the 10 miler. At this point i think she was thinking i was fragile and to be honest SEPTEMBER and well alot of August was really really hard for me. Just too much stuff happening that sorta all came to a head mid and late september so i was fine with her talk of " just go have fun." well I was going to break 70 if i could and i knew deep down i could.

If you read Angela's blog you know, that you basically jump off a cliff ( into the mississippi river) for 2 then climb back out for 5 miles then even off for 3. Welcome to St Paul. JH had said to start at 7s and not faster and descend but i ended up banking some time off that cliff and when i got to mile 5 i was at 7 min pace. I knew from there on that the climbs were more gradual and i knew ( thank you tangerine gel) that i could hurt and hurt and drop that 7 min pace.I negative split those last 5 miles and met my goal with 18 sec to spare. I swear that running cold ( and actually the temps were awesome) is harder than running off the bike when you are warmed up and your legs are already turning over.

Here are a few pics my friend Terry took. Terry Lee like KY is out at so many events, and he is the best cheerer and photo taker. Thanks Terry! I think my glove got all messed up i was trying to wave but it looks like i am asking for a favor. 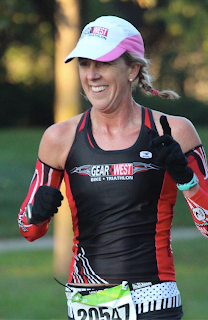 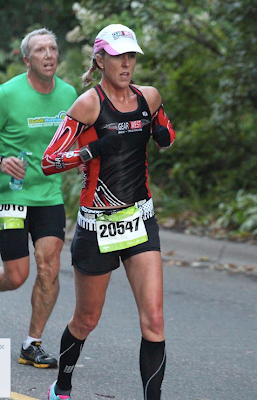 At the finish I met up with some nice friends and it seems we all ran a bit long. My Garmin had me at 10.09 and i think i run a good tangent and Angela had it as 10.2! I know for sure that those first miles i was dodging bodies even tho i was in coral 1 very close to the front. I jogged another 2 miles back with Ann and then went home to my parents. My mom was a trooper and got up extra early to walk up to the corner with her walker. My dad has a bum leg too, so its been tough to see them work so hard but its so special to have them cheering. None of this means anything If i dont have my family and friends around, racing or not. IT feels sorta empty to me. And honestly that is some of what i am figuring out right now. End of season thoughts i know. No regrets, but also so so so blessed to have friends ( and blog friends) that get this crazy sport and the " its there, why not?" attitude. Special too to get to hang out with CY and warm up with her, to see Erin and Nick at the finish, and to keep my mylar blanket thinking my dad used to use those when he pheasant hunted. Oh wait, he doesnt hunt anymore. I saved it anyways:)

So the off season is underway and I am thrilled to have some mental rest. The physical stuff is fine too, I dont feel all that banged up but i know i need to bank some deep rest as 2014 is a big year!
Thanks for reading and congrats to all the runners, especially the 26.2. Wow i didnt envy you yesterday  but i sure did respect you!

And just because she makes me smile: 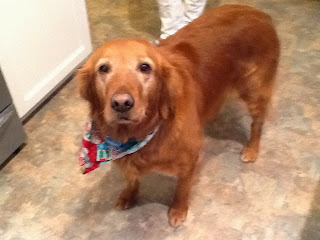