2017 Lifetime Mpls Olympic Race: The race in my backyard!

Lifetime Triathlon is one i decided to try in 2013 because it scared me. It scared me bc it's on tight roads, roads that aren't really all that great ( some improvements made, lots to be desired) and its flat. I tend to like some hills. Plus Nokomis in mid July can be pea green soup. This year was my 3rd year I think? 2013 we had huge rains and it got shortened so i didn't have to ride the really crappy backside or the course. Ironman got in the way of 2014/15 and then i went again last year in 2016. I was super duper nervous last year bc i had never done the whole course.

This race has as close to an IRONMAN feel to it as you will get without doing a WTC race. ITs big, its loud, there are a lot of people, of all abilities. It is not the small town Waconia race where you pretty much know who is out there, and know the roads have great shoulders and you don't have to do much thinking. This year? I was so relaxed. ALOT of this comes from some new thinking and new ways of looking at my training, and my longevity in this sport. In the big scheme what did this race mean to me on July 8? Can i keep relaxed and still remain strong? We would see. Its the first time racing where I haven't kept a close look at my timing devices. When i finished Elaine asked me my time. I said " I really don't know." I didn't. ( love her, she said " well i think you were ahead of me." ) haha, no um you passed me around mile 15 of the bike:)

Swim: 24:24 ( from timing) I had a great swim. I swung wide a bit at the start but got the keyhole going and even knocked my head on the way in on the metal balls outside the swim area. Oops. That was sorta funny. Hanna and i jostled a bit, but other than being warm ( 76 deg) in a LS wetsuit i felt pretty good, kept the turnover up and strokes long.

Bike 1:06 per me 1:08 per timing.  I had heard I was 3rd female out of the water. I know Gaby was WAY ahead, and later saw her on the river road mixing it up with the lead guys. Not sure who was ahead of me bc i never saw anyone. ( later learned it was maggie, who somehow turned wrong? not sure)

I didn't feel like i had great legs to be honest. I tried to just not spike my watts and to let my legs warm up to an intensity that i felt was right. The first 12 miles is lovely. The west river road is pristine now so you can settle in a bit, but as you come back towards the lake and then head down nokomis parkway and to Lake Harriet its anyone's guess what pothole or crack you will land in. I spent most my time in AERO but i was certainly not head down and i was not pedaling efficiently. I know this is true for everyone, so pretty sure all the riders share this. I remembered in 2016 seeing Chris Spoth flatted and running his bike up the parkway in barefoot. So i prayed that wasn't my destiny. The MPLS police did a fabulous job controlling traffic to keep us safe and there were very few wayward spectators using the open roads for their burly and dog running. (Last year i remember there were a few times you thought you may hit one of them)

My bike comfort is always a work in progress. Chris ( balser) has worked tirelessly at helping make my Small Bike ( don't ask, i regret this sizing but i didn't know any better) is too small. We have made it as big as we can but its been a real pain the back. ( Dave, want to buy a bike) So especially on courses like this where i cant really stretch out and settle in, my back hurts. I came off the bike with > 3/10 which was a bummer per pain levels and hoped it would settle down once i was running.

T2: I always give myself a bit " get your back into alignment" time as i run out of T2. I don't have a tea party but i do let myself JOG EASY PEASY out of T2. I saw maggie right ahead of me and pretty much let her go.

Run 44:50 : I started this run very easy. Relaxed, drop the shoulders. Let the core take over and get your back upright, Yay, it was working. By mile 1 I was feeling pretty ok. DEF less back pain.
Sean went by me and gave me a hug. Who has time to do that when you are winning the race? HE does! Such a fine person, and athlete.

The run felt hard. I guess this sport is hard. I kept telling myself to relax and to just run. I had a goal of winning the masters, but i really didn't think i had anyone to chase. On the 2nd lap i saw Roger who said " one more lap" and at that point, yes i was happy for the only partial jog over the cedar bridge and the ability to be running down some of the folks on their 1st lap of two.

I wasn't sure what pace i was running, I have gotten in the habit of not looking, just going by feel. As we hit mile 4 i decided to try to not slow down....at 5, i decided to try to " move faster, " I hate to say pick it up bc that is all relative but right before mile 6 I think is when i saw that there was a runner ahead of me. I wasn't sure it was Maggie bc she is tiny and there were lots of collegiate tiny people out there. Some spectator said to me " you can catch her." I was like " damn, deep breathe."
I decided i would just keep running in my heightened " pick it up" speed and see where that got me. Well it got me to her shoulder right as we were about to cross into the road and go down the chute. At that point it was " GO." I wasn't about to hang on her shoulder, that is annoying and figured if she went with me i had no hope in outsprinting her. She is fast!

Some guy was there ( you can see his arm in the picture below) and he went with me. I dunno maybe he set a pick for me! But i ran in that straight away like I was running down a drop shot that was two courts away. And when i stopped i was like " what happened? " and " oh that may leave a mark."

I survived that sprint and clocked a good 400 time in doing so!  My splits were pretty consistent and fastest in the last 2 miles, same as liberty. Marilyn is onto something.
Funniest is the guy said to me " you made me throw up 4x in that final stretch. " at first i was like HUH? then i see this picture and see that he must have veered to the bucket after.

I congratulated Maggie and we posed for our  Pretzel and water sponsor deals. LOL, No really she was super sweet and told me she had gone off course earlier on the bike. She has a ton of potential and will be fun to watch her continue to race.  Then said " who are you?" I didn't have enough energy for a snappy comeback ( a friend/peer of your moms? :))))) but introduced myself:) 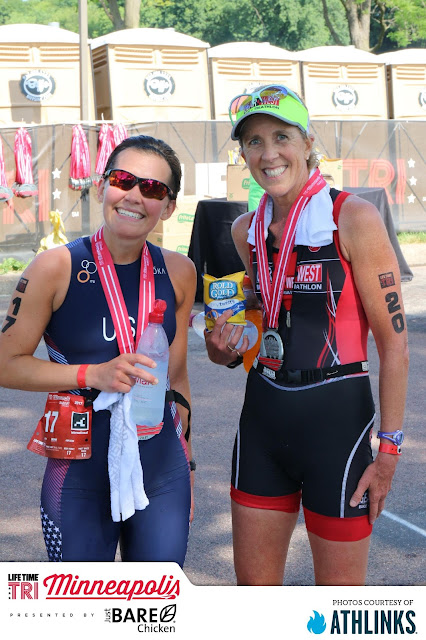 Well that is about it. Finished 2:21 and lowered my course record for 50-54. Got 5th elite ( two college kids beat me, guess that is ok!)  I love that i can get home from this race in 10minutes. I love that you get BARE chicken coupons ( yum yum) and i love that you really do get to share the course with some fabulous athletes. Its got a great energy! I always say i am not doing it again, but as long as i am welcome in that 2nd wave you will hopefully see me back.

Thank you to my coach Marilyn Chycota for continuing to hold onto my shirttails in training, and to be as much of a therapist as a triathlon coach. Your knowledge and life experiences continue to help me see that I am not old, just need to train smarter and continue to get some life challenges   ( see older blog) in check.

Thank you to Kevin and all the folks at Gear West Bike and Tri. And to all my PT's ( Viverant) and my main LMT Bianca, for keeping me in working order. And Crystal, when i can make the drive for handling all the other stuff:) Yup i am not old but hell the body needs a lot of TLC as we get older!!

Thanks for reading!!!
Posted by GoBigGreen at 9:29 AM No comments: