Seems like a good time to write a quick blog. Believe it or not i have family that reads this and they dont really care too much about triathlon. If were playing pool they would be equally interested. Maybe. Cant say for sure.

I have been spending some fun and quality time with the love of my life. See exhibit below. No comments on the BIG HAIR, but really if you are a new reader, we pulled this wedding off in about 2 weeks bc of Rich's surgery at  Mayo. We cancelled it once, and didnt even send out invites. I had nobody to do my hair, but someone was free and this is what she did. Never say never, it worked for that day:) And all my southern friends loved it! 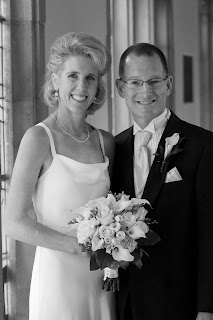 Rich is off the chemo for now, or forever, we dont know. Our Oncologist gave us the words you dont want to hear, "we have nothing else for you." And asked us if we needed a few minutes. WE are like "UM, No." but really? I can see how a family who does not have the knowledge or the strength ( due to shock, illness, finances) would be like REALLY ? We are out on the street? After one CT scan?
So we move forward. We dont know what that means because we decided to take the weekend off, and then do some calling monday. Down to Mayo to start. I am also looking into Clinical Trials thru the National Cancer Inst. But its up to him. I want him to first decide what he wants to do. That chemo can be nasty, as we saw with the last rounds, so even tho i say "Its your life," of course i want him around as long as possible. He has a very strong faith, and i know we both know its in God's hands, and that the prognosis, is just that. a guess, a number, a timeline. And IT will be what it will be. But perhaps it may explain a few things that have been going on with me.

Because my blog is about my loves, and onc of those is triathlon, Ahh....you were patient and we got here.
See below: Yup, love it. All that sugar and gel made me so sick saturday after my Long ride/Brick that i had diarhhea all night and couldnt even eat dinner. I havebeen working diligently with someone on this and he got an earful. Perhaps it was the salt, perhaps what i ate the night prior, perhaps the 16+ gels ( well I use Liquid shot) but that is going to change. I cant live on that much simple sugar.
Today was a bit better, but the reason this ties to Rich is he has terrible GI issues from the chemo. And that is letting up a bit since he is off it for 2 weeks now, but gee, I took my first immodium last night. They work:)
That could end up in my race day plans. 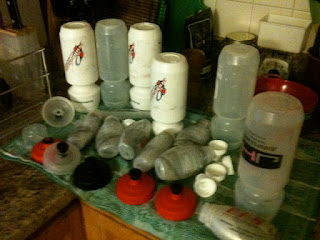 Which brings us to the pic from race day last year. The love of my life and my best friend, my sister. She may not know she is my best friend, but she is:) And so this year. Things are going to go better for me post race. See above, and race day nutrition. Last night was a stark reminder of 2011. So taht is not goign to happen again. I ran my long run today and i undergeled and used powerbar chews and coke, much better. I need to get some honey stingers, those are my favorite and i know my coach uses them. 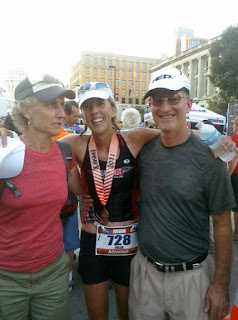 So, Ive covered the important stuff.
But i didnt cover the bike race last week in Cable, Wi. I did awesome. Rode 50.6 miles in 2:20 and got 4th OA and 1st AG. Then i fell over. Seriously. I think i forgot to clip out. You know there was no T2 to be thinking about just a finish line and while i was so FOCUSED the entire race I was most focused on not gettting caught by my friend Kyle and by Rich and his pal Scott who started right behind me. I finished, the people i knew at the finish CHEERED LOUD, and i sat up and fell over aftertalking to them. So i was banned from this bonehead stuff and told to wear bubble wrap. ( I did scuff up a bit and fell on my hip, which has led to too many MD visits and even an XRAY) so really people, falling over is not good, and I am too young to break a hip, luckily.
Just when you thought it was safe and i was with it, I yardsaled on my run today. I put on tougher ( read heavier and more traditional) shoes bc my Cortana's seemed to be light and lovely but my calves the next day were pissed off. So lets save those for race day i said, and put on the ones that make me feel like i have neuropathy in my feet. I hit a patch of rocks going onto the trail and SUPERMAN my way into the gravel. The same elbow as last weekend is bleeding like crazy. I stand up, assess what's going on and realize its just blood. Use my precious handheld water and clean that sucker off and keep running.
I think i will live but i hope i dont flip turn into the wall tmmrw. I Can blame today's on those shoes, seriously. and of course fatigue. Not much sleep lately, and also just "its the last week of IM training, things hurt!"
So there ya have it. Stories from the bonehead herself who is now certain that Race day is goign to be easier than all this.
Posted by GoBigGreen at 2:49 PM 12 comments:

Is it really August?

Hi there, long time no talk from me. I hope you all are having a great summer. I cannot believe it's August! Life around here is, well, eventful. I havent been posting bc sometimes there isnt much to say:)

Lets see if i can do this bullet style! Less thinking.

I left off with Saddle Sores. I dont really have SS, its more a hot spot, I got a shim under my R cleat and i think i am good, still gets sore but its nothing awful. Some shorts are great. SADLY, the SOAS shorts are not good. I think my legs are too long. I think they should make some shorts for longer legs, bc they just cut me funny. Boo. I may have to sell them, anyone? worn once or twice.

Rich is still doing chemo. Yup. He isnt doing so well on this latest one. Its really hard to see him sick from chemo. We keep faith that its going to extend his life, and he keeps a good attitude most days, other than when he is up all night. Yuk. Poor guy. He has lost more weight which is bothersome but we joke that he can now climb as well as he descends. He rides his bike bc it makes him happy, some people may think he shouldnt but then they should mind their own business.

I dont sleep all that well. See above. This may or may not have contributed to my weekend fun at the Emergency Room with a killer sore throat. And dont tell me about sore throats ever again. This one beat the nerve pain i had with shingles and since i am married to a doctor, trust me, we take visiting the ER VERY SERIOUSLY. You dont do it unless you are going to jump or havent slept in 3 days and found yourself making howling noises all night long bc you could. NOT. STAND. the pain any longer.

Some how i managed to swallow enough liquids to keep my weight and strength up, and we still dont know what it was. Viral or Bacterial who knows, but i am glad that is behind us. 4 days of bed rest and lots of drugs dont do your body any favors tho. Why i expected my return to movement to be easy...
well wouldnt you? you basically rested for 4 days, wouldnt it seem like your body would be refreshed?
Not quite. Lets just say I have found another roadblock that i am determined to get over before race day! Hello Shin's and ITB and all those soft tissues that loved lying around for 4 days.

Despite thinking i should be all up in arms about IM I am sorta in the "well, it will happen, and I am going to show up with the best plan i can have." Before my lovely TIME OUT, I had the best bike test i have had ever. Can you say that riding a 13 mile TT and improving your LT Watts by 30 is a fluke ? I hope not, and i think not. And I swam a great open water race as well. So the fitness is there. I have to remember all the stuff i HAVE done, not what i havent done or missed. I do sometimes wonder if the mind and body really ever get along 100% in IM training. For some maybe. but for me it seems like they dont.  I also know i am cursed blessed with knowing too much about the body. That makes turning the head off very hard.

Here are some fun pics from a 6 hour ride that Rich and I did in June at Lake Pepin. It was a tough day, and he did great. We have figured out how to ride together and i just love riding with my favorite partner:) 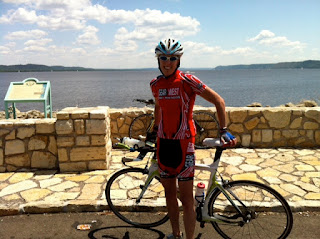 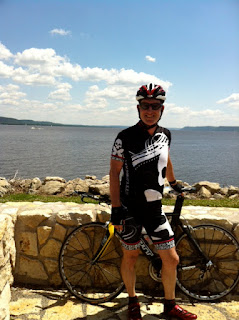 Its too soon to be thinking about next year, but i did promise my body 6 weeks off from running if it helps me run this marathon:) Or more if it wants it!

We head up to Firehouse 50 this weekend. A great weekend with some fun and tough biking and a little Firehouse 100 for me ( if you get my drift) and then a LONG run sunday with a 15k race in the middle of that. So i get company for 15k of my long run, Yes! And hopefully water stops. You never know in northern Wi what the course will have!

So that is about it. Summer is flying, we are loving the Olympics other than still wishing one of those swimmers would pick up Andrea Joyce and throw her into the warm down pool. of course NBC would not show it.
Posted by GoBigGreen at 1:30 PM 10 comments: