It's been a long time. Alot has happened, and yes there was one more race in there.
I love this time of year, just not what follows, and with our temps cooler than normal ( oh why is that a surprise) other than one week of summer last week...well its perfect running weather!

I love the Twin Cities Marathon weekend. It truly is the most beautiful urban marathon. I have done it once, the only open marathon i have done and likely will do. That day was a day like yesterday yet colder. My finish photo has me in tights and gloves and looking like a cold cold runner. Which as i recall i was due to snow. Yesterday on the other hand was just cold before and after, the conditions for running were perfect.

My goal for this race is to try to always go under 70 minutes. This year we had a bit of a different course due to the summer flooding we had, the normal route was closed. All in all I think it was apples and oranges and Steve in a Speedo has more than enough dialogue on which is easier which is harder where the hills are which hill has more grade. etc. etc. You get my point. Subjectively I felt that sunday was slightly harder just bc we had two sets of steeper hills as opposed to just one longer gradual climb. All ok, not gonna lose sleep and I just made sure to not GAS myself up those hills so i could ease back into a close to race pace run.

Mike was also running and was in coral 3 so we parted ways and i got my warm up in. Before you knew it it was go time. National Anthem, ditch the garbage bag, and the small gun goes off. I was standing next to jenn S and we both decided they needed an IM cannon. I made sure to start my Garmin as i passed the timing mat. It felt like 10-15 sec but later i learned it was 25. That paid off in my timing.

For the last 3 weeks i have been dealing with a too familiar hamstring issue. The dreaded -opathy. This time in my Right side. The GOOD SIDE, as i call it. So that is another blog for another day. But having gotten the green light from more than one medical professional to run, I decided I would run but if it got painful i would jog it in. All the while knowing i was in shape for running sub 7's. I would have to check my ego at the door if that was the case.

So Miles 1-5 ticked by pretty fast. The short sharper hills were tough but i felt really strong, the way i have felt in all my training. JH trained me well for this and I cant say enough about 3 - 4 weeks of training and my speed came back. Super fun ( even if it means i cant run now, i guess it was worth it!) At mile 5 I still felt awesome, working but not in pain at all. As we climbed up Summit i remember reading something that said " remember this is only 2 miles...." and i finally looked at my AVG pace. I hadnt been looking, didnt want to bc I wanted to run by feel. My hamstring started to TUG a bit but it was by no means painful. And I saw that my pace was right at 7:00 as i made it up Summit. When i hit mile 7 ( basically the end of the longer false flat) I was tired but i knew that I was going to  make my goal of sub 7. And at mile 8, I saw my parents and their friends ( so nice of them to come out on a cold morning) and that gave me some fuel to kick it in those last two. You do have ONE MORE incline that isnt really very long, just before mile 9 and that was just fine. I took a glance at my Avg pace and saw 6:56 and was elated. And my Hamstring hurt but I am not gonna pull up now. Off i went and finished in 1:09.16. Super pumped with that. I did slow it down a bit coming down hill into the finish as that is what hurts more, the lengthening of the muscle.

Special thanks to Steve H too, who came out to cheer and anyone else who called my name. I saw my finisher video and i know why my mid back is so tight. I was running like it was cold! Tight in my upper body, luckily my lower body felt awesome:) I waited for Mike to get in and by the time he did i was a popsicle. I had changed but it was cold and we hurried thru to get his stuff and then trekked back up summit to my parents house, with a caribou stop ( oh so warm) i would call the day a 2 mile warmup, 10 mile race, and 2 mile walk to cool down.

Thanks to Terry Lee for the picture: and the nice comment that i was too fast for him to get a better pic:) 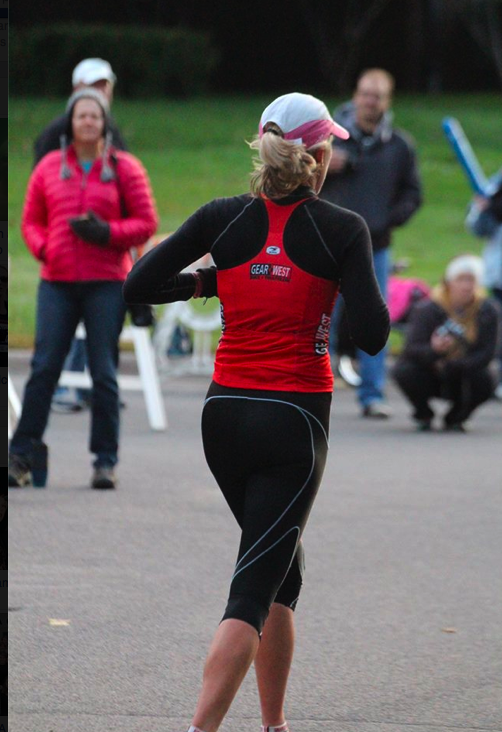 SO NOW, you may have heard that the race was short. Ha, so the lead vehicle must have been texting or hadnt had their espresso, so we missed a turn, so the OFFICIAL COURSE ws 9.86. MY garmin though had 9.99 so i am taking this as what it is :) I must have had to dodge a few people ( yes i did) to start! People make errors just too bad it was at the TCM!

I just love this race and walking up summit, despite being draped in two space blankets and with chattering teeth was amazing. I loved seeing the final runnners / walkers for the 10 mile come in, the lead wheelers for the marathon ZOOM by, and to thank the police and the volunteers along the way. I have to admit when iran thru the DELTA airlines water stop at mile 8.5 I had enough filter to stop myself from saying what i was thinking..." WHY THE BIKE HATE? WHY?" but i knew these nice people dont make the bike fare rules so why ruin their day? :) Yes i am serious i did think nasty bike karma for Delta in that last mile.

Since its always a topic....I had two gels with caffeine as my fuel. One pre race with water and one at mile 4.5, with water, that ended up all over me. Other than that not much water it was cold. Mike took the chews i gave him, kicking and screaming that he didnt need them. But he did. and finished strong in 1:30 . Now if only he had trained. Yup, I had to give him some grief for the " OH IF ONLY I HAD TRAINED " comment. We all have lots of friends that would have won if they had only trained, dont we? :)

Stolen pic. The others are messy, too many people to get a good shot. I stocked up on free stuff while i waited for mike:) 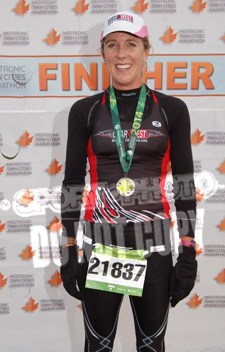 So now its off season. Things will be fine. Just gotta step back and heal. I want to do a 2014 recap bc in looking back its been a big wonderful year. Thanks for reading!!