Life these days for me, at least, can either put me under a tree afraid to make a move, or some days I feel like i have so much ahead of me, and so much to look forward to i dont know where to start!
Hence this leads to some paralysis.

I have to admit that often what makes me hide under this tree ( or want to go to bed at 8pm when its dark, oh make that 5pm) is when I start worring about money. Now granted when i was single and lived alone in my modest condo I was fine. I was all about knowing I had more coming in than going out. Insert a sudden "Tsunami" in your life, for lack of a better term other than "death of spouse" and its a bit overwhelming. All the sudden there is ALOT to manage. I know i am capable of it, and i have no doubt that I can and will be fine and will figure it out, but its a bit like you are in quick sand because you dont know how long you can stay afloat. Or if you turn your head the wrong direction you may slip under bc the rope someone hands you is behind you and you are looking the other way.

No need to get into details but this has obviously made me a bit skitish about committing to races or anything really besides my day to day living. I even realized I hadnt been to the grocery store in a week. Which meant i had no spinach and no broccoli, staples i love. Then again I had kale. Never far from green veggies at my house and luckily my Jewish mother is always got food to share and feeds me well if I stop over. Its hard to cook for 1. Rich was a big eater so i have had to adapt a bit. My sister doesnt eat MEAT, so i have to make sure i cook some real MEAT as JH calls it! I did get my slow cooker out and have a pork tenderloin ready to be cooked. Since its all the sudden FREEZING COLD OUT I am fine with the slow cooker, it makes no sense to me to use it when i can grill.

So as far as races go.. hmm. Triathlon. Lets do a What i know list:

Ok I had about 3 mintues to post this but i wanted to just check in.
Thanks for reading:)

PS Oh i won a 5k with Marit, that should have a race report but its sorta boring. Lots of heavy breathing (ME), Spitting ( Marit) and I waited 6 seconds to be precise to cross the line with her. We both won a pie. And my sister won a pie for 3rd woman, so on the pie front we dominated.
Posted by GoBigGreen at 4:06 PM 8 comments:

Well we had snow today, enough that i drove all the way to st paul to swim and turned around because traffic was so bad and the ice was so bad that there were cars everywhere. Knowing that lovely Jen isnt in my life right now as my slave driver, just as my friend, I took it to mean I had work to do at home and turned around.

Here is photographic evidence that I won that race. Number 2 is behind me. Ok now i dont feel like a poser. And YES it was halloween and i have pumpkins on my cheeks and I was dressed up as...
hmm..
A snake.
Not really. 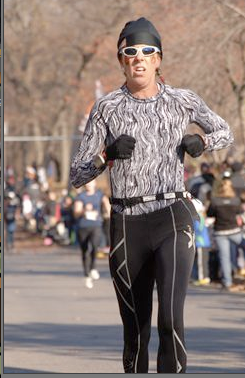 Other happenings besides a tornado and 64 degrees saturday night, turning to snow and sleet sunday and snow today. Well life is still a blur. I dont think you can imagine it and I wouldnt wish that any of you can imagine it. Just be thankful. I have had more people tell me, those women that have stood in my shoes, that the first year is a blur. It's like you have Alzheimers. Since i work with older adults with dementia and Alzheimers i will fit right in. But if you have contacted me about getting together or meeting up and I havent replied its because I forgot. No I didnt its just that I can only process so much and to be honest its just too hard sometimes to talk about this. That is maybe why i am finding solo workouts so lovely.

At the same time I hate being alone, so go figure I would say that i feel more like i am bi-polar than having dementia. See even this post is sounding a bit "OFF." And I know that:)

Being back at work has been lovely, and I know its what i need to do to get thru each day. There are some unsettled things that arent blog worthy but lets just say when THAT Is behind me I will feel a bit more at ease and normal.

We celebrated our 3rd wedding anniversary last week, and I had a party. IT was tons of fun. And Rich was there. I know it. I still am in shock and miss him everyday or every minute. But as one of my 83 yo residents told me today, "You will never forget him and you willnever be the same, it's just different from now on..."Sort of like a new normal as i call it. This was after i walked into my class and said
"Vacation is OVER, back to work." and then burst into tears. I teach alot of widows. As you can guess the majority of the seniors that are still living are women. So they get it.

And back on topic to winter. I got my cross bike out. Not ready to ride it but its going to get ready bc I suspect we arent done with this snow stuff:) But lots of fun things to look forward to I know.
Thanks for reading.
Posted by GoBigGreen at 3:00 PM 7 comments: