Well its time for another race report. Havent been too many this summer but that comes with the territory of IM training. I wanted to close out the ( too short) summer season up here with one more race. As much as I loved racing late July I wasnt ready to hang it up in August because anyone from MN knows that we have a forced " end to season " around the corner.

Jen gave me a few leg opening workouts and i did a Time Trial to see if i could shake a bit of IM shuffle out of  my step. I will say that i think i did, but it sure hurt.

The obvious race was Square Lake Short Course. I LOVE me some Square Lake. Its where i swim on Wednesday AM's with my pals and its where i play with Eagles and Loons. Any chance i get to run out there as long as JH doesnt say " FLAT COURSE" i will do it after a swim. Nothing better. Riding out in Washington County is the best too. A few roads need repaving and luckily one big stretch on this race's bike WILL FINALLY get its new surface next summer. Luckily. I am always amazed if i go thru that section and dont flat.

So race day dawned and i racked right next to my teammate and World Champ ( and AG champ) Heather Lendway. Heather is the nicest, most humble champion i have ever known. Her sister racked btwn us and that was fitting for how the race would shake out.

Race didnt start till 8 am so while i wasnt nervous per se for this I did want to get out and get a good warm up. I never am totally CHILL at a race. ITs just how it is. I want to do my best on that day and that means getting a good solid warm up especially when its cooler out. Morning temps were chilly but the air was close to 50 when we started and the water was really fine. Maybe about 70? So i got se up and did a little warm up and suddenly Randy ( RD) said " Elites are starting in 30 sec!" yikes i barely made it back to the beach to do a 180 and start. I got a pretty good start, started next to heather who very quickly pulled away and i know was 1st out of the water in the elite wave. It was a bit choppy but i was still happy with how it went though i felt like 1/2 mile was about when i was getting into my rhythm.

Exited and took the long RUN up the wooden stairs. Talk about HR jump, WHILE playing the wetsuit struggle dance.  I Did have my Garmin on but what took the time ( AS USUAL) was getting the leg over my timing chip. Insert long leg sigh.
I like how this pic makes my arms look big. haha. Yes Jen. I said that. 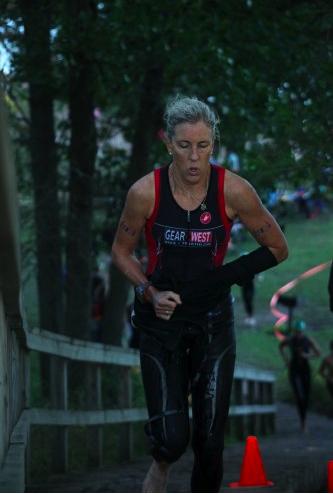 So i was about 30 sec behind Lisa and way more behind Heather but i got my suit off and into the cool air i went. Ok my arms arent as hulky here. LOL. 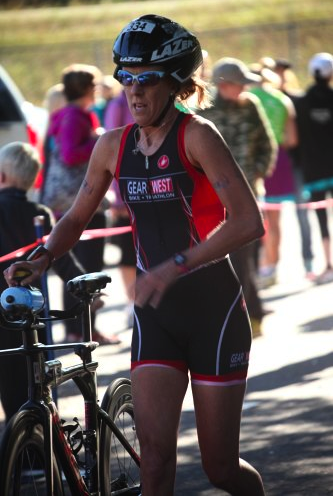 This is a rolling bike with lots of hills and punchy inclines. The surface as i mentioned is questionable on the back half of the course, and for 17 miles i decided i was going to TT it as best i could. A few honks from a minivan mom ( sorry if that offends) on the treacherous road made me move over and back off a bit. Other than that just a solid hard ride.

Funny about this race is that the camera guy ( thank you minnefota moments) sits in the shoulder on a stool and i hope nobody will hit him. ITs sorta funny sorta " um, hello" as he snaps your photo on the bike.  Yay the good shoulders are back! Can you tell i am happy to have some muscles in my arms:)  And the GW tats :) Ok i am amusing myself, now back to the race report. 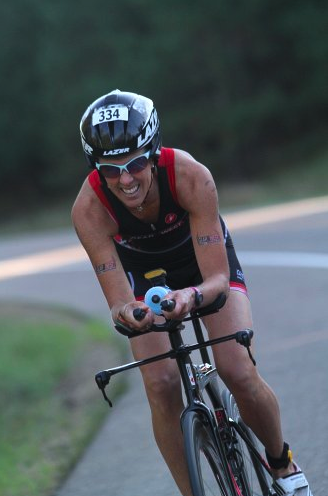 I saw Lisa running out of T2 as i entered so i sorta figured I was solidly in 3rd with not much hope to catch a speedy Lendway sister. My toes were a bit numb so i had a harder time putting my shoes on but once i got going i shuffled up the hill and out the park gate. 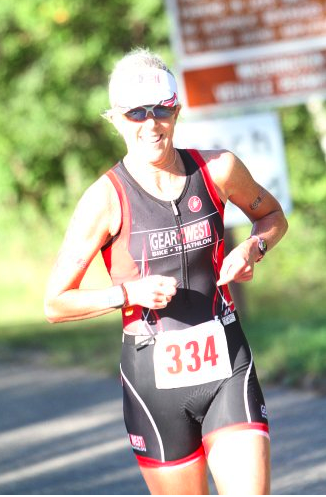 I set my sights on some dude's to catch and that i did. A few dudes went by me but I just kept my pace. The run course really rolls as it hits some gravel roads and then you end out back on Square Lake Trail ( where we biked out of the park) and i was greeted by Mike on his new road bike. Super fun to see him and hear him cheer me on. It was his first time at a race. Afterwards he said " Everyone looked in pain. " :) And then he also said the guy in 2nd was super grumpy. Well yes he may have been bc Heather was chicking him.

Anyways I negative split the run which likely means I decided to not let a few guys go by me, but overall I remembered what a nearly OLY distance felt like. 5 mile run isnt a 10k but after IM training 5 was enough. I ended up 3rd, knowing a few AG Women were fast I was relieved to see nobody caught me.

And so there you have it. The week prior I was doing normal stuff like going to the theatre with Mike, who keeps me cultured. And sleeping a bit more, and dragging my feet to get out to ride when its below 50 deg. The indoor pool is too hot and too short ( miss my 50m pool) and its a tough time of year bc summer is all but gone. It's also a tough time of year bc it's Rich's birthday ( August 29), the Anniversary of his passing from this earth ( Sept 28), and also our wedding anniversary ( Nov 7).
Sigh. Lots of fall things that make me love the fall but also a bit uneasy. 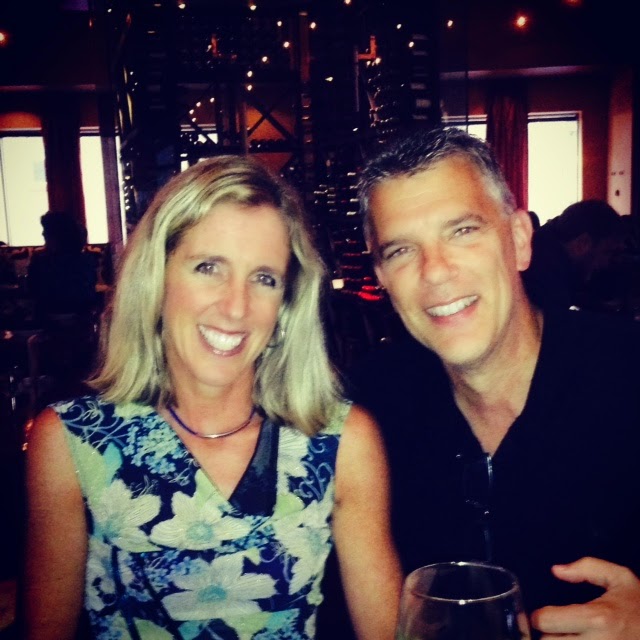 Im glad I have a nice guy in my life to laugh and have fun with. And someone that when i start taking myself and triathlon too seriously tells me that he is going to just drink beer and not workout anymore. Its a funny banter we have but i am thrilled he loves his new Felt road bike and is quickly figuring out how to clip in and out. Not bad for a guy who has never ridden a road bike before. Doesnt get easier as you get older!

So that is it for now. I am doing the TC 10 miler if JH doesnt kill me and my hammies dont cry uncle. After that its some much needed time off and a few fall trips. Thanks for reading my hodge podge of a blog update!