Fall in Minnesota, AKA off season. Plus some mini race recaps!

I had a dream last night that it snowed. So if i were to end this blog post in just a few sentences it would read " FALL in MN: we think every day over 60 is the last and we wait for snow. Goodbye."
When in reality that isn't true its in the back of our heads.

The leaves are at peak, a bit late, and its cold in the AM and recently gotten into the high 60's and lower 70's for about 1 hour 4-5pm:) I am not quite used to the 35 deg in the AM, but we always say that in a month or two you will wish it was that warm in the AM. So it goes.

Here is a little recap of the rest of my summer and my early fall. 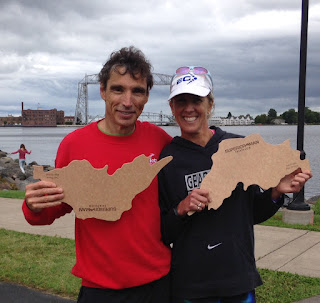 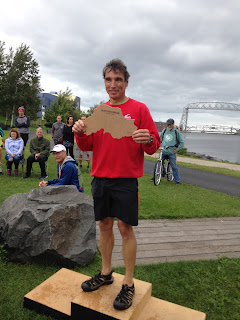 We both ended up on the podium which was super cool. We had hoped to stay at our cabin but with the change of venue ( logistics) it meant no saturday bike check, no indoor T, etc it ended up being a huge hassle so we grabbed a bed with my friend Renee. While no race can control the weather, it was wet. Very wet. But luckily we raced in dry and had a lot of fun. Not sure i will go back but i got myself back into the headspace of Half Iron racing ( as in you cannot go as fast as you do in an OLY) and it was super fun to swim in Lake Superior. That i would do again.
And yes Roger is from Wisconsin so we just figure that is what Lake Superior looks like when you live over there. LOL. 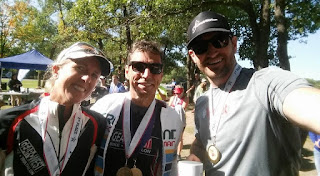 Ross, the man, who won the race snapped us some pics. This was Uncle Randy's last year putting on the race. What a fun venue and a great course. It was chilly to start but things warmed up well with the sun. I love Square lake its my home open water lake, despite the drive from St Paul i doubt you can get a cleaner body of water and a solid 2-2.5 miles uninterrupted ( other than loons) of pure bliss.

Today was interesting. Roger and I both started in the elite wave. He didn't catch me till about mile 14 of the bike, and then he went storming by me. When i got into T2 he was still there. I refrained from commenting on the tea party bc you know that doesn't help the car ride home, but again its his 2nd race! We ran out of T2 together, he on my shoulder. I had the typical Julia talk " I hope he does not sit there the entire 5 miles!" And well just figured that if we were riding he would not WAIT for me, so i wasn't going to feel bad if i didn't wait for him. Things self selected and I finished a few minutes ahead of him and all was good. Super Suzie was there and had passed me earlier on the bike so i was running for 2nd female which i was glad to keep hold of. This was ADD ON race #1, i had planned to be done after Sup Man.

Other Stuff:
Annually we do a memory ride for Rich. It varies on the distance and timing, so many people attend that we do our best to plan it when we know there isn't another event going on. This year we lucked out ( besides the course, see below) on the weather and we had nearly 40 people riding in memory of that crazy guy who had a quirky sense of humor. I remember him thinking that taking his picture in front of a Giant Otter was the best thing ever!
His mother attended coffee after the ride and said it best. When i thanked people for coming, she blurted out " Yes thanks for remembering all the stupid things Richard did on a bike." She of course was kidding, but don't we all have a bucket of dumb things we have done on a bike!!!


We made time for rides with friends and some beer stops.
I also ran the TC 10  miler.  This was add on race #2. While you have to enter the lottery in July, I had really thought this would be a fun run. NO care on the time. It was sort of like that but i also had decided to enter add on race #3, so we decided to use this as a tempo long run and it was perfect timing 3 weeks out from my last half!

Sometimes when you add on too many things, the balance gets out of whack and something breaks. SO....While the TC 10 went great, i held back and i had a lot of fun. IT was hard to not be " racing  it" I did what i was told and i felt good. I did not shell myself and the humid and 50 deg race temps were great. My sister and i walked the 2.5 miles  ( or more bc its hard to get out of that venue!) to my parents and i was super excited that i knew for my next half i was ready!

Sadly, my body didn't really recover right. I have had some ongoing Hamstring issues and while i was confident that I was doing everything right ( with treatments, strength, etc) I just decided that it wasn't worth the risk to travel to another Half. So with a lot of hemming and hawing and analyzing if this was an injury or this was just a blip, well for once or maybe twice in my life i am taking my own advice. Not racing NC 70.3 this weekend. Ya i ate a lot of costs and airfare and my bike is having a little vacation without me, but hey. I am most sad to miss a race cation with my buddy stacey. BEST OF LUCK STACEY!!!!

IT is what it is. I have done the old " hail mary " pass in the fall only to be the one who limps thru the winter, depressed that i can only be a chlorinated rat. Plus, I think i finally see that going for it every single time, maxing out, only gives me high's and then lows, and if i have learned anything this summer its that i want to be on a better equilibrium than that. I want to invest in next year, and the year after and heaven forbid the AG 55-59! I am not there yet! But while i don't see racing triathlon into my 70's and older, who knows. I just know that I have been incredibly blessed thus far and that as we age, we are gonna get nicked up. You are active and you push yourself? you are gonna get nicked up. I hope that the only MD's i see are still non operative and have needles and I hope that my PT's continue to help me stay out of trouble. My Coach Marilyn has really helped me see that I have nothing to prove, and that there is still room for improvement as i age. I am not going to lose it, as long as i use it wisely!

We also went back to Road America. I was able to do an open water swim in Lake Geneva and do some great hilly running and riding. Though we both flatted, those roads were messy but super fun.
And of course, some more time at Bang....and more cars to drive us to the brewery. 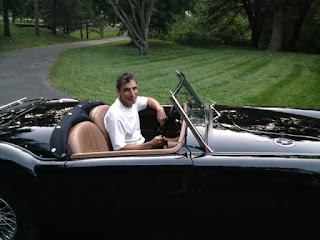 Cant end the post without Einstein :) Ruby too, but i don't have a recent photo of her......

Posted by GoBigGreen at 8:59 AM

Great recap of another wonderful year. Good for YOU!!